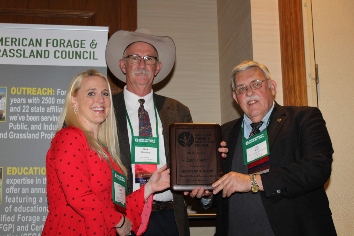 Dr. Jennifer Tucker was presented the Merit Award by the American Forage and Grassland Council at their recent annual meeting held earlier this month in St. Louis, MO. The AFGC’s Merit Award is presented to individuals who have made superior contributions in some phase of forage and grassland agriculture. Dr. Tucker was nominated by fellow AFGC members and selected by the AFGC awards committee. Recipients of the Merit Award are recognized for their work and productivity in forage and grassland agriculture and service to the industry and the AFGC. At the award ceremony, a summary of Dr. Tucker’s research and extension accomplishments, as well as her service in various capacities with AFGC, the American Society of Animal Science, the National Forage Testing Association, and several other state and national professional societies, was presented to the audience. 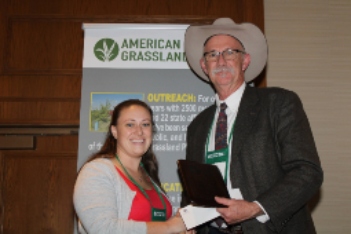 Taylor Hendricks took home second place in the American Forage and Grassland Council’s Emerging Scientist Competition at their recent annual meeting held earlier this month in St. Louis, MO. Taylor presented her research on the forage quality of interseeding alfalfa into bermudagrass when harvested as baleage and the effect of storage time on that forage quality. Taylor is co-advised by Dr. Jennifer Tucker, Asst. Professor in the ADS department at UGA’s Tifton Campus, and Dr. Dennis Hancock, Professor and Extension Forage Agronomist in the Crop and Soil Sciences department at UGA’s Athens Campus. The competition included PhD students or recent graduates from seven other universities, each of whom had conducted research on forage production and management topics.